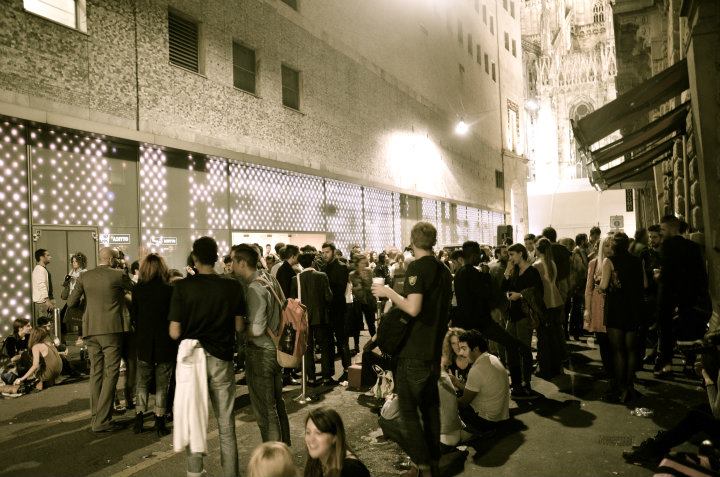 And what will she do with Thursday's rags when Monday comes around ?

The fashion week party, or rather, pre-party drink like one of those early punk shows I went to when I was a boy: you feel you have total freedom to do whatever because everyone is doing anything. A man is a fluorescent toga-like dress with his whole head shaved except for a little random-seeming tuft on the side with a long lock sticking out of it attracts no attention, and his example was only the most egregious. There were weird Americans with platinum hair and bangs eating cherries that the bartender popped into their waiting open mouths, strange Milanesi discussing the best clubs in (actually outside) the city in English to each other and telling me the ones in town were filled with ‘rednecks, politicians and mafiosi,’ a hyper-active, hyper-competent bartender who fulfilled my request for ‘un negroni – FORTE,’ Germans dressed for a soccer game, and a tortured electronic version of ‘Killing an Arab’ blasting from the DJ booth. As I was waiting for my drink, which was suitably strong, one thought went through my head:  “Men from Kentucky and Italy are dying in Afghanistan to preserve this way of life.” I didn’t see the picture of Hemingway hanging up on the wall which, until I got there, was the only thing I knew about the place.

In the middle of the throng on the street was our humble little Meet-Up group of mainly Italians looking to practice English: the mag ed dapper in his blazer, drinking a beer from a bottle and wondering why he didn’t check that it was fashion week before, and above us, the mass of the Duomo, stained glass ablaze for the third time this year, watching over us all, the gold eye of the Madonnina peering down to via san Raffaele of a Thursday night in September.