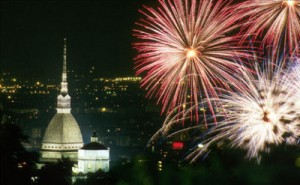 And the rockets' red glare?

Italy’s political situation, overshadowed lately by events in Middle East, is grim.  Berlusconi’s coalition totters.  Fini’s breakaway group seems waiting for the right moment.  Indeed this fall March was bandied about as the right time for a vote.  More power has flowed to Lega Nord’s Bossi, whose ministers voted again making the 17th a holiday, and Berlusconi even showed up tot he vote with a handkerchief in green — breakaway Lega’s color.

As the case was in WW2 and the anni di piombo, the north is again the battleground for Italy’s future.  Lega parliamentarians are in the middle of passing aggressive decentralization reforms that could be completed as early as May.  If so, Berlusconi will lose ground as Bossi’s secessionists take Italy back to a past of campanilismo and freedom from taxation.

With typical Italian flair for a big show, Turin is prepped for an unlikely show of Italian nationalism.  Italian’s lukewarm sentiments towards their nation are legendary.  The political crisis going on for the better part of a year highlights this, especially when a member of the ruling coalitions regularly insists that unification is not worth celebrating.  It leads one to ask, what’s all the fuss about?