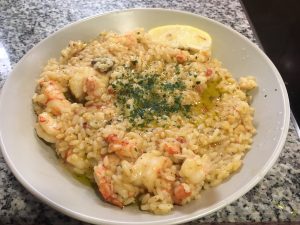 Since I’ve been recovering from a mild illness, or busy, or both, war zone cooking has been limited to soups, which probably deserve their own write up, especially as I’ve been experimenting with way to allungare them, often transforming them into hearty, often porky, and thus wholly un-Italian dishes.

But today’s post features shrimp risotto 1400 km from the nearest port. It is possible, with a couple of major shortcuts. Remember: war zone rules.

It seems like many versions of pasta with seafood — spaghetti allo scoglio, con le vongole, alle cozze — have made their way to our shores, but seafood risotto, a favorite of the northeast, hasn’t quite caught on. Perhaps because it’s hard to make — one really should use a broth obtained from boiling all the shellfish.

But here’s a version that one can make in a war zone, thanks mainly (this time) to the Knorr company. I’ll do better next time. I note that Better than Bouillon does a fish stock on Amazon. 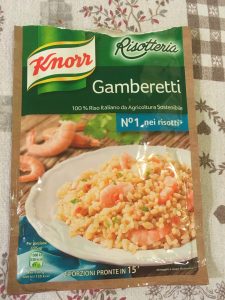 made possible by Knorr

Being sort of an impulse dish, this came mainly from the Knorr “gamberetti” ready-to-eat risotto pack which got my attention at the Italian PX. It’s easy: simply immerse in cold water, bring to a boil, let cook for 15 minutes, and eccolo. That seemed too easy, like cheating. Here’s where it gets creative.

I had a pack of my standby Thai frozen shrimp (Italian-branded) in the fridge. It was a foregone conclusion that I’d use them, but just thawing them and throwing them in at the end seemed too boring.

So, in a large, flat pan I made a soffritto of a garlic clove and some preserved local green peppers I cooked down before my leave, cooking it on low heat so the oil soaked up all the flavors, threw in the thawed shrimp, and then added a dash of this California chardonnay (suitable only for cooking). The timing was tricky, and I dreaded the shrimp getting rubbery. The risotto wasn’t quite all’onda (a term that I’ve seen in numerous Milanese cooking blogs, but that my thoroughly northern wife claims she’s never heard), so I poured it into the pan with the risotto and let the extra liquid boil off.

I added some organic Italian EVOO instead of butter, some frozen Italian parsley and the juice from a fresh lemon wedge. The result was not bad, considering the whole 1400-km-from-the-coast thing. Constant stirring meant I got all the excess liquid off and nothing burned, and the shrimp maintained their texture.

I have one more of these Knorr packets — the next one an alla pescatora with shrimp, squid and clam. Since I’m highly dubious about how well those critters can be dehydrated and reconstituted, let’s hope that the PX has one last packet of frozen shrimp. Technically, today’s were more gamberoni. The one I spied in the freeze were certainly gamberini. Stay tuned.

**Update — one Italian PX only had some very dubious looking Scottish-origin scampi. There’s still one more option, but it’ll have to wait.