Someone leaving post left out some canned organic pumpkin, and having just come from the belpaese, where mighty round and gnarled zucce are at every produce stand, I knew I had to do something with it. Now, my wife’s true cooking talent, I’m convinced, is in her minestrine, zuppe and passate. Her version of pumpkin soup is a lot more minimal, but then again, she has access to a level of fresh ingredients that I don’t. But that’s what makes war zone cooking fun.

I did some research, reading American recipes (heavily spiced, creamy) and my standby Giallo Zafferano, and combined them using what I had to hand. Now, usually, I am usually all for the minimal Italian way, but again, we play by war zone rules here. 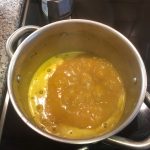 cooking down the bouillon

I made a soffritto with a finely chopped onion, a garlic clove and some fresh grated ginger (I had bummed fresh ginger off the cafeteria — doctor’s orders for a cold) and the Spanish EVOO. I also added a pat of butter. Once the onions were sweated, I tossed in the brown spices — a dash of curry, bit of cinnamon — stirred, and let that come together. I also put in a tiny bit of salt, probably not necessary with the bouillon. Then the can of pumpkin.

I had boiled up a couple of cups of Better than Bouillon (which makes everything better, I’m convinced) while the soffritto came together, and I added about one cup at this point.

After it had come together a bit, a dash of paprika (went very easy on this one), some herbs de Provence (I’d prefer just straight rosemary, but I’m hoarding it), a tiny dash of white sugar, and — inspired by one of the American recipes — a tiny drop of maple syrup. (This also compensated for my lack of nutmeg, which I’ve just remedied with an Amazon order.) I added the other half of the bouillon, some water to thin it, and jacked up the heat.

pasta soaking up the extra moisture

It was still a little watery after fifteen minutes, so I added — sparingly — some short pasta, penne and elbows. Again, I’d prefer pastina, tiny little ones, but they’re either too pricey or sold in bulk on Amazon, so I’m making do. As I’d learned watching my wife, they do an admirable job as a thickener, soaking up the excess moisture. Don’t add too much or you just end up with pumpkin pasta. I let it go for about fifteen more minutes then let it cool for about five, adding a dash of black pepper, a liberal amount of parmigiano reggiano and some excellent BioItalia EVOO.

It was very tempting to toss in a bit of milk (and due to good luck at the dining hall, we somehow have whole organic milk from Italy), but that’s extremely un-Italian, and it’s easy to see why with the pasta — that’s your thickener, and the grana (grated cheese) is your dairy. There was no need. 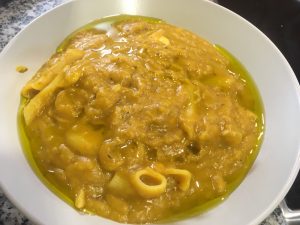 I was worried I’d over-spiced. This level of tinkering goes beyond my usual impulses, but I think going light on everything helped a lot. So did the cooling. It was excellent, velvety and smooth, agrodolce, filling on a cool fall night, and all it lacked, I think, was some sort of herbed or sage-y pork product on the side — sausage, a cut of loin, an involtino, or perhaps some speck or pancetta. I wished also that I’d had some crusty bread (like pane casareccio) to either fare la scarpetta or make into crostini, but I had to settle for crackers. It wasn’t the minimal version of the stuff we ate in Italy, but a fine addition to the war zone repertoire.

Now. If only someone would leave out another can of pumpkin.