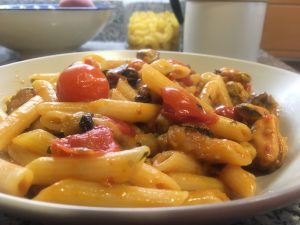 With one eggplant from last weeks’ veggie haul left, and some frozen Chilean mussels, I decided to adapt this. The idea of seafood plus eggplant is clearly a southern one, but one I’m starting to appreciate more.

Started by slicing and salting the eggplants early this morning while I did other routine chores. The moisture came out nicely and I washed off the salt and resulting brown liquid and patted dry with paper towels. 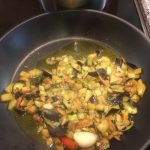 Those went in a large pan with EVOO and a garlic clove, and soaked up the oil nicely. (One recipe I reviewed called for a deep-fry of the eggplant in peanut oil. Someone gave me some truffle oil which uses a sunflower oil base, and I thought about using it as it has a higher smoke point, but thought it was would be a waste. However, let the record show that I think truffle oil is a gimmick. One should eat truffles, and use good olive oil to dress things. There’s no excuse for inferior flavored oil.) After they absorbed a good amount of oil, I tossed in a can of these Victoria cherry tomatoes, which seem to add magic to everything. 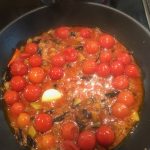 I had some assorted fresh local peppers, so decided to use a tiny portion of a red one instead of the good dried ones I obtained from Amazon. I obtained some fresh basil from the war zone herb garden and chopped it finely.

Meanwhile, I put the mussels to thaw in some lukewarm water and put on the pasta water to boil.

From there on, it was just a matter of timing. When the pasta was almost done, I tossed in the mussels for about two minutes, along with the juice left by the thawing. I drained the pasta a good minute before the packet instructed (9 minutes for penne, so 8), threw a little water into the condimento, and then mixed the penne in, turning the heat up a bit to cook down the liquid. The basil went at the end. 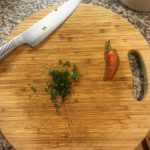 Like the shrimp dish before it, this one came together fabulously. It probably should have been two plates… but golosamente, it turned into just one. Ah well, it’s the day off here, and I never have pasta for lunch on work days.

I go on leave in a week, so probably just a couple more recipes and then it’ll be radio silence for a bit.