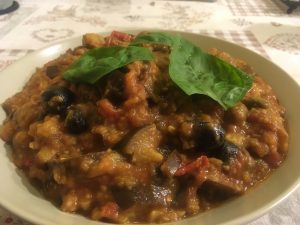 This will be the last for a bit, as I’m off to the land of good and accessible food soon enough. I found myself with far too many good fresh vegetables and jarred items the other night, so I improvised a caponata. There are a lot of regional variations, but this is the warzone version here.

Soffritto of garlic, two non-fiery long peppers and EVOO in a high-walled pot as I cubed and sliced 5-6 eggplants, most medium, one giant. I added the eggplants gradually and, since they’re sponges, added a bit more oil each time.

Then 5-6 ripe red tomatoes. This all began to cook down well enough and to be sure, I needed the liquid in the pot. 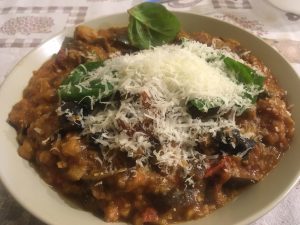 I covered, turned down the heat a little, stirred frequently and let come together. I then raided the fridge and decided to get rid of all my green olives (pitted), black olives (not pitted, but much tastier and ideal for cooking as they have a rich black flesh that falls apart) and capers (all jarred Saclà items courtesy of the Italian PX). I also tossed in an anchovy fillet, which immediately melted and just added a salty flavor. Then a bit of unrefined sugar and some balsamic vinegar (BioItalia, amazingly available here). I was on the fence about this, as I think that white vinegar gives it the agrodolce (sweet and sour) taste that makes it so distinctive. The sugar neutralized the bite of the vinegar well enough; it wasn’t as agrodolce as previous versions I’ve made in a better-stocked kitchen, but it did the trick.

Continued to cook and stir, then let cool for at least five minutes and topped with fresh basil from the warzone herb garden.

It came out better than I expected, to be honest. I had some pecorino so I couldn’t resist grating a bit, which may be sacrilege in Sicily, but as I’ve said I’ve mainly spent time in the north, so someone please let me know if so.

It’s meant to go with meat, so the leftover half I had today, nice and chilled, with copious amount of freshly grilled chicken kebabs, was not a bad way to end this time in the ‘zone. My only regret is that I wish I’d pitted the black olives.

I’ll be back online with more ideas next month. Till then, arrivederci.