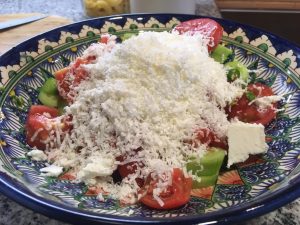 It’s been a few days of rich and bountiful eating, so I decided to go for something lighter, not to mention the cucumbers and tomatoes, so fresh a few days ago, were in danger of getting overripe. It’s immediately obvious to me what to do with these two delicious and cooler summer vegetables (technically fruits to the pedant). In a Spanish-speaking country where I could get sherry vinegar, and if I had a blender, it’d be gazpacho. But šopska salata is also a fine choice, especially given that the stalwart Italian PX stocks DOP feta cheese.

Now, I’m treading into the Balkans here, and I know that emotions run high about most all questions of national identity in that part of the world, and I know the Greek battle to secure DOP labeling for a kind of white sheep milk cheese that is produced in innumerable forms all over the Balkans was seen as a nasty nationalist move by many. But this is war zone cooking, and although I’d prefer real sirenje, that ain’t happening, and DOP feta is not a bad substitute, especially for my countrymen used to eating bland and hard stuff at salad bars and in gyros most of their lives.

I can’t think of any foreigner who, when traveling in the Balkans, didn’t immediately fall in love with the šopska salata. (I feel particularly strongly as I lived in the Šopluk for a bit.) Now, there is a lot of information on the internet about what is and what isn’t in a šopska, which seems common to all ultra-simple regional foods.

What I knew was this: the freshest possible tomatoes and cucumbers, cubed, topped with the most finely grated sirenje. Maybe a single black olive for decoration at fancier places. Possibley trace amounts of sunflower oil, not that you could taste. To Americans used to bland, tasteless iceberg topped with ranch or thousand island dressing, this was a new frontier in salads.

In the cafés in Belgrade, they’d add some finely diced and fairly hot fresh pepper. Every few bites, you’d get a bit of heat that could be instantly ameliorated with the cooling cucumbers and creamy cheese. Delightful on a sweltering summer day. That’s what I replicated here, to, I think, great effect. My only gripe is that the south Slavs rely on sunflower oil far too much. With a few drops of Zucchi organic, it was delightful. My only regret is not having some hearty Macedonian white bread to sop it up with.

I should probably have a post at some point about similarities between the Balkan and Central Asian kitchen — the fresh vegetables, grilled meats, and good bread all doubtless have Turkish roots. But that’s a subject for a different post.