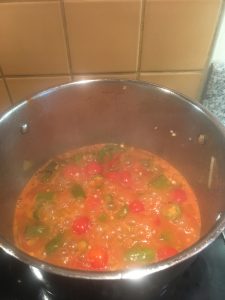 good amount of steam after adding the tomatoes

It’s a long weekend, so another day to cook. We’ll deviate from the usual Italian theme due to availability of  local produce.

Having come into a large quantity of okra, I was at somewhat of a loss as to what to do with it. Of course, as a good southerner, I have nothing but the fondest memories of my mother’s fried okra, but I’m lacking both my cast-iron skillet and cornmeal. Unfortunately, I’m also missing the requisite South Asian spices to make a good bhindi masala. But this is war zone cooking, so it’s all about improvising, using what’s at hand, and not wasting good fresh vegetables.

After a good amount of research, I decided to try this recipe, which ultimately morphed into a gumbo-inspired dish. After all, gumbo comes from the Angolan word for okra, kingombo, still seen in today’s Portuguese, French and Italian terms for the green ladyfingers so popular in the southeastern U.S. 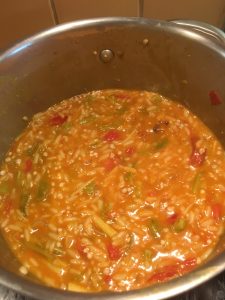 The main challenge in making good okra is eliminating the so-called slimy texture from it, produced by a substance called mucilage, which you’ll certainly feel when you slice it. This is why some recipes recommend not slicing small okra, as well as drying them well, soaking them in vinegar, and various other remedies. I don’t find the texture so objectionable, especially in a soup or stew. At any rate, I washed and dried mine well before cooking.

I used a high-walled saucepan and made soffritto of onions (finally, fresh ones), garlic and EVOO. Then, as I cut the ends off the okra and cut them into fairly thick slices, I tossed them in. This was with fairly high heat, so I added a cup of water to mediate burning. I also added two long hot green peppers, fully intending to take them out later, as I’d learned my lesson with heat from the peperonata a couple of days ago. The chopping took awhile, and when all the okra was in, I added cumin, cayenne and paprika (I didn’t have turmeric).

I mixed it all, turned down the heat, and added more water and a teaspoon of chicken stock (Better than Bouillon, Amazon). At this point I took out the hot local peppers, which had cooked down plenty and shed their seeds in the base. Finally, deciding to fully abandon a truly South Asian recipe, I added a few slices of salamella calabrese (subbing for andouille) and some pilaf-style long grain rice (gifted by some anonymous person departing). NB: the rice will quickly soak up the moisture, so beware if you turn your back to take a phone call or update your blog. This is a good point to put in  a bit more water, q.b.

I turned down the heat and then, when it was almost done, added all 300g of the frozen shrimp (Italian PX), some frozen parsley (ditto) and turned up the heat a bit, again, stirring constantly. Then I let it sit for a good hour to come together well. 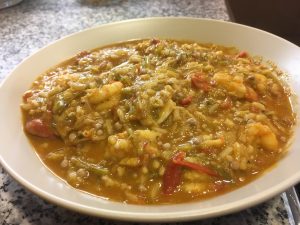 Verdict: I was a bit too heavy-handed on the cayenne, being so used to Italian peperoncini that I forgot the heat this powdery stuff has. Despite tossing in the shrimp at the very end, they were a tiny bit overdone for me — I think these frozen ones adapt far better for the high-heat, flash-frying style of Italian pasta condimento than the slow-simmer that a gumbo needs. The salami added good texture and went well with the rest of the stew. As to the dreaded “sliminess” of the okra, first off there’s no avoiding it in a slow-cooking recipe, but I found nothing objectionable about it. I mean, it’s a stew, so one expects it to be wet, or, better said in Italian, in umido.

I’ve saved half and fully expect it to be enjoyable the next day.

This entry was posted in food and tagged cajun, gumbo, louisiana cooking, okra. Bookmark the permalink.