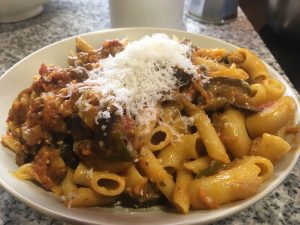 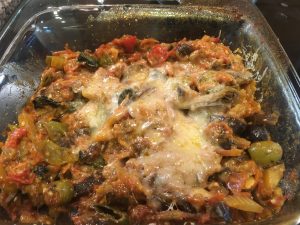 By dint of kindness and good luck, I obtained three bags of fresh veg lately — eggplants, fresh tomatoes (thankfully, since the ones flown into here are a crime), okra, peppers, onions, and cucumbers. So what to do other than to make one of the delicious Mediterranean eggplant and pepper dishes — in France it’s ratatouille, in the Balkans it’s pindjur or ajvar, and in Italy, it’s peperonata or parmigiana. Having already covered the latter, I thought I’d do the former.

I thought the peppers were sweet, and even tasted one, but some hot ones got in my batch, so mainly I was worried that it’d be too hot. Hot it was, but not inedible. I didn’t really have enough time to do a fully 80-90 minute bake, so I cooked on the stove and in the oven.

As with all eggplant dishes, I sliced and salted first. I had the makings of a Northern-style soffritto in my fridge from the salad bar (diced celery, carrots and onion). Not normally to be used in a Southern dish, but waste not want not. I tossed that in, along with a garlic clove, then the salted and washed eggplant slices, and let it cook down. Since eggplants are a sponge that will take as much EVOO as you have, I had to add a little more oil to prevent sticking. After that mix got soft, I added a can of these excellent Victoria cherry tomatoes (I’m saving the fresh ones for salad or seafood dishes). Then I added the chopped peppers, long green crooked ones, and (since I thought they were sweet) a dash of red dried peperoncino and some oregano. I let the mix cook down over fairly high heat as I boiled water for the gomiti and penne (figuring I’d uphold the cucina povera Neapolitan tradition of mixing leftover types of pasta). I’d pre-heated the oven, so I tossed the peperonata in with a liberal amount of grana padano (again, I’d rather use pecorino but I’m hoarding it for later — this is war zone cooking, c’mon).

When the pasta was al dente, I removed it from the oven and tossed everything, along with a spoonful of the starchy reserved water.

It was decent enough to where I finished the whole thing. I think it would have been better the next day, maybe. I also might’ve liked the blend the ingredients together for a smoother consistency. I definitely would have used less hot peppers (and I like hot). Not bad, but seemed to be missing something. Maybe the Northern soffritto was a mistake. At any rate, it was nice to have fresh vegetables.

Today: some manner of shrimp and eggplant dish.