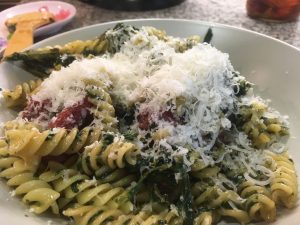 Warning: this dish looks much healthier than it probably is

With the leftover pancetta from the amatriciana and some frozen bietola, I had a couple of options. Basically an amalgamation of these two recipes.

I did a soffritto with EVOO, frozen onions (working on obtaining fresh ones) and peperoncino while I boiled the bietola. I had the rind (cotenna) of the pancetta, so not wanting to waste, I threw that in and let the fat render down into the EVOO. 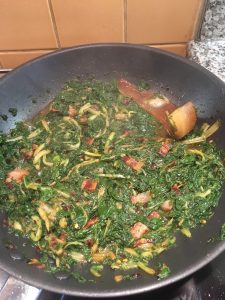 I strained out the bietola, kept the water boiling, added the greens to the soffritto, and added the fusilli to the water. (As anyone who’s made the Ligurian classic trofie al pesto con patate e fagiolini knows, there’s magic to cooking pasta in same water used to cook greens.) When the pasta was just al dente, I strained and tossed the whole thing in the soffritto, which of course by this time had a good amount of pork fat in it. The fusilli turned a dark color due to the fat. I then threw in a few pomodori al forno (Saclà, Italian PX) — these are semi-dried, so much fatter and juicier than the usual sun-dried ones. I tossed the whole thing with grana padano (Italian PX), not pecorino as I’d have preferred, and the result was excellent. But then again, as grandmothers from both the Southern U.S. and the southern part of the boot know, fat from the belly of the pig does make things good. As my dad would say, “now you’re cookin’ with grease!”

I’m learning how to moderate with very quick-warming and very hot burners (my moka boils up almost instantly in the morning), so the key here was to cook the pancetta and cotenna very slowly. I also took the time to slice the pancetta very, very thin, almost like bacon. (It pays to cook when not starving sometimes.)