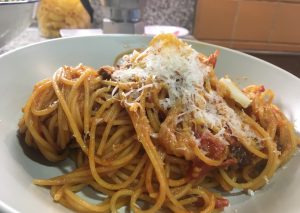 I took a break from cooking and eating as I had another stomach bug, the second in as many months. M&M Enterprise Cooking started as a way to avoid food-borne illness but there are a lot of ways to get sick. As a colleague asked, “did you touch a doorknob?” So as long as I’m able to handle it, M&M will continue. Today I went ahead with the plan to make spaghetti all’amatriciana.

Amatriciana, like many simple regional dishes, has many variations and there are a lot of opinions about it: onions or not, white wine or not, pancetta or guanciale, spaghetti or bucatini. I’ll leave it to the curious to look around the internet, although I’ll caution all readers against the New York Times article of January 2008, which exacerbates a number of ridiculous misconceptions about Italian cookery that American travelers have.

This simple and inexpensive dish was a go-to for my Veneta wife and I when we were dating and first married, so I’ve used a variation of her recipe, which differs from stalwart Giallo Zafferano’s in that she never reserved the guanciale/pancetta. What can I say, she’s not from the south, but lived with meridionali for a long time. I prefer to add a bit of wine, but it’s not easy or cheap to get alcohol here, so I forwent this time.

As per usual, the first thing you always do for timing is put on the big pot of cold water to boil for the pasta.

Unlike the wine, I was able to obtain a 200 gram piece of pancetta tesa from the ever-reliable Italian PX. I used somewhere between half and three-quarters of it, cutting off the rind and reserving it for a later bean dish. I cut it straight through, leaving a hunk of pink meat in the middle and fat on either side. I tossed that in some good EVOO and added some frozen onions (Italian PX, hard to get fresh here).

all manner of frozen goodness

This is where it gets tricky — the onions will burn quickly, and you want all the pork fat to cook off into the EVOO. I managed to avoid burning, but my onions got a little more caramelized that I’d normally prefer. I then added some organic red pepper flakes (these came from Amazon).

Next, I tossed in a 400g can of good cherry tomatoes (Victoria, €1.90, Italian PX). I turned up the heat a bit, now that I had some liquid to prevent burning, mashed the tomatoes and kept stirring till it all got to a good consistency.

The Granoro spaghetti (half of a 500g pack, €1.50 at the Italian PX) cooked al dente in about four minutes (always undercook a little, as you’ll finish it all in the pan). As I was draining, I added some of the starchy water to the condimento.

I mixed everything, as one must do, while adding liberal amounts of Grana Padano (the PX has been out of the more authentic Pecorino Romano for the past two weeks).

I plated it carefully, added a tiny bit more cheese, and tiny bit of the Zucchi EVOO (not what I used for cooking).

The result was better than I expected. It all came together well in the mixing, and the pasta itself absorbed the wetter parts of the sauce. The peperoncini and pancetta conspired to make a smoky, earthy flavor. My only regret is that some white wine would have brought that out more, and pecorino even more.

There’s still a hunk of pancetta left, so there’s a chance to revisit.

Humanitarian note: don’t forget that Amatrice, the town the dish gets its name from, was hard-hit by an earthquake two years ago. There’s a festival promoting their local culture starting today, if you’re in the region.

Next up: cooking with frozen seafood, something the PX seems to never run low on.