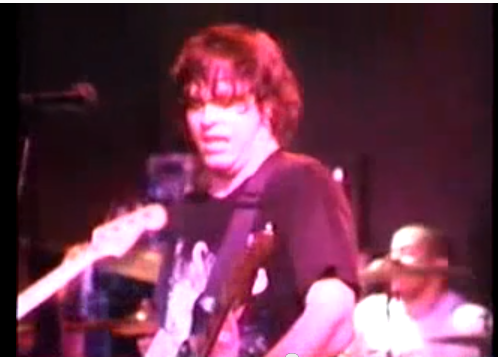 I didn’t make it to Louisville in time for Jon Cook’s memorial on March 9th, but I was in Louisville recently and I did extract some Jon Cook gems from my archives. The first two feature Jon’s collaborations with a couple of other recently- and tragically- departed Louisville musicians.

“Unhindered Perception of the Happy Machine”

For some reason I always liked this song a lot, even if the lyrics are barely intelligible and the song meanders along. Never recorded in a studio, this is from a show in Chicago in the mid-90s, featuring versatile drummer Tony Bailey, who also left the earth far too early in 2009. Listen to how the song verges on falling apart near the end, but Tony manages to bring it back together. Critics usually call Crain “math-rock” which implies an incredible level of tightness. I don’t dispute that Crain went through a period like that, but a lot of late Crain seemed fairly loose, held together by solid musicianship and that elusive intuition that all musicians seem to chase.

“Broken Heart of a Neutron Star”

Live at a 1994 Simple Machine gala emceed by Jason Noble, who also died last year tragically young. Not really my favorite take of this tune, mainly since Jon Cook doesn’t sing it and it’s his song, but this version is notable mainly for Jason Noble’s hyperactive and hyper-enthusiastic introduction. Louisville is indeed a muddy horse farm as well as something of sprawling metropolis, at least if you are from elsewhere in Kentuckiana. The rumor in 1994 was that the original title of the song was “Noble Attitude” and that Cook had written it about his friend.

Not a Crain tune, but an Experimental Pollen tune. Experimental Pollen was a ferocious live band that featured Troy Cox from Evergreen on bass and engineer Will Hancock from 456 on drums. They played the party circuit ca. 1996-1997 and were most noted for headlining a New Year’s party at the Lausman’s family farmhouse on the outskirts of Louisville. An all-star AC/DC cover band featuring Cook, Britt Walford and Crain alumnus (and musician in his own right) Jason Hayden warmed the crowd up. This being New Year’s in Louisville, we didn’t need much warming up. Pollen took the ‘stage’ which was a hardwood floor, in front of several hundred sweaty, intoxicated kids with great anticipation around midnight. Will counted off, 1-2-3-4, and the crowd reared up, ready to jump as one to the sound of the rock. The first note rang out, the crowd all hit the floor at the same time, and there resonated a horrendous and violent creak — the sound of the floor giving way. The music abruptly stopped, the whole ugly engine of the bass and drums grinding to a halt. Cook sheepishly spoke into the mic: “Uh. I think we broke the floor.” One of the elder Lausman brothers ran downstairs, perfunctorily checked the foundations, and came back upstairs, giving the all-clear sign, and the rock commenced into 1997.

This song doesn’t have that raw energy but is a bit more subdued, which was another side of Cook’s songwriting. Experimental Pollen released a 7″ with guest appearances from noted indie rocker Flood, which is pretty worth hearing (if memory serves) and also a split LP with Louisville heavies Wino. The split LP is worth hearing for the Wino songs; let’s leave the review at that.

Coming soon, I hope: a live 1992 recording of Crain doing the Misfits’ “Teenagers from Mars,” as well as more live material. Watch this space.

This entry was posted in kentucky, music. Bookmark the permalink.

3 Responses to Some Jon Cook Music