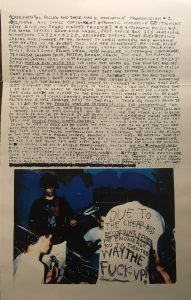 Back in 1996, fans of lo-fi music, Crain, and Louisville’s particular brand of homegrown rock might’ve been following Experimental Pollen, a short-lived Jon Cook project.  As it looked like Crain was about to split up, that small community might’ve paid particular attention to what a possible Crain follow-up would be. Experimental Pollen had a pretty mighty presence that summer, with a crack rhythm section composed of Troy Cox (Evergreen) and Will Hancock (Four Fifty Six), but the very few released recordings never really measured up to that lineup, and the band folded as Jon got more interested in noise music and his decline began to inexorably take hold.

However, before all that, he managed to release a 7″ EP on the one-off Gene Rick label (sporting a St. Cloud, Minnesota P.O. box for reasons that remain obscure to me). Essentially a split with New England indie rocker Mike Flood (also obscure), I got my hands on a copy of it recently and am pleased to post the two best solid songs from it, both recorded in “that electrifying spring and summer of ’94.”  I’ll second the electricity.

To cop from the liner notes, “long live the Experimental Pollen!  Happy!!!!”

***UPDATE: I’ve added a couple more Experimental Pollen songs to the playlist so readers/listeners don’t have to jump around the links in the last sentence of the first paragraph.