Life among the Lowly 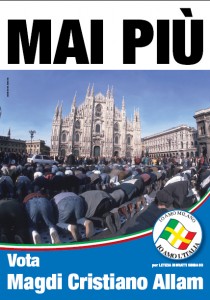 Only one god allowed at Duomo, gents

Journalist-cum-politican Magdi Cristiano Allam loves Italy, he tells us. The Egyptian-born Italian, who made a publicized conversion to Catholicism, seems quick to absorb Italian values — if rampant, no-holds-barred race baiting is an Italian value.  Going far beyond provocative and into offensive, his images of Muslims praying in Milan’s piazza Duomo, Chinese rioting against shop closings on via Sarpi, and of a Roma family on a riverbank near a resettlement camp with the legend NEVER AGAIN in Italian above them can be found all over Milan, especially near its Arab and Chinese neighborhoods.  I’m not sure, especially in the Chinese case, what the ‘never again’ refers to — cheap labor, goods, shops, and an entrepreneurial spirit and work ethic that the Italians seem to have left in the 1950s? 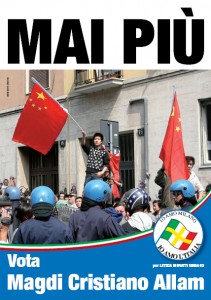 No more work on Sunday

Mere meters away from the Chinese consulate and from via Sarpi, the Chinese-themed posted shows up. On Corso Sempione, not far from the Egyptian quarter around viale Jenner, the Arab poster shows up. Roma wash windows nearby on via Procaccini. (The perverseness of ‘never again’ is especially offensive in the Roma case.)

The message is clear, and it’s not a tolerant one. The posters assure us that he loves Milan (presumably one in which immigrants make their contribution to the economy and then shut up and stay out of sight) and that he loves Italy (a monoethnic one with silent workers). 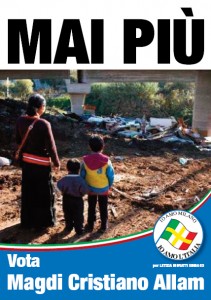 "Never again" and a Roma family

If an obvious nutjob like Allam were to be relegated to political sidelines, he would be easy to ignore.  But what is disturbing is that he is heartily endorsing incumbent Letizia Moratti in her bid for mayor. Moratti also has the hearty support of the prime minister. That such a mainstream candidate in the financial, industrial and supposed ‘moral’ capital of Italy (an old horse now picked up to flog by PdL, Berlusconi’s party) is anywhere but on the fringes along with the neo-Nazi Forza Nuova where he belongs is incredible. What if David Duke or Nick Griffin actively campaigned for Michael Bloomberg or Ken Livingston? (Such an analogue is, of course, happily unthinkable in Washington, DC.) 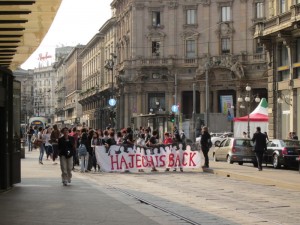 Back from where? Hajech is home to the prestigious art academy of Brera

But perhaps such sentiments are to be expected in a country where the Lega Nord is in the ruling coaltion, and where Gianfranco Fini is seen as a viable and sane alternative to Berlusconi or Bossi.

Until the opposition is able to do more than make commuting hell on Friday afternoons and mobilize a few columns of art school students to march around Duomo, who carry banners announcing that they are ‘back’ (I presume to the barricades, of which there were none) and nothing more, expect more of the same. 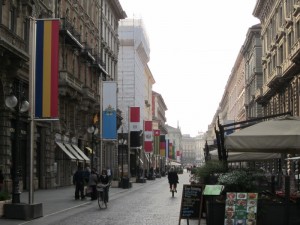 The promise of the Expo: a cosmopolitan Milan?

Further down the street, a series of flags of all nations put up for the Expo 2015 showcases Milan’s cosmpolitan nature and promises of worldliness.  At the end of one encounters Lega’s tent, where a woman curses the students as delinquents.  One wonders what her take on the flags and what they represent is.  Among them I note Egypt and Turkey.  I half expect Allam or the Lega’s next posters to show off this morning’s tragic crash off of Lampedusa, where another rickety boat spilled 500 migrants into the sea [update: 400 rescued].  That is truly something that should never happen again, but I think that point would be lost on Allam and his backers. 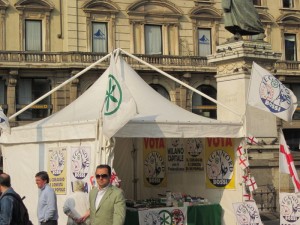 ...not when the Lega's racists enjoy pride of place.

Perhaps they will next celebrate the death of Osama, if they are even that tuned into happenings beyond Italy’s borders.  With Lega’s 2009 Indian poster in mind and bizarre violence that it did to notions of race, hegmony and power in the West, one almost hopes that they are not.  Geronimo indeed.

BREAKING: The pope in Venice has told Catholics “not to fear others.” Given pious Veneto’s strong LN base, one hopes that this won’t fall on deaf ears. Maybe even Allam will listen.

7 Responses to Life among the Lowly