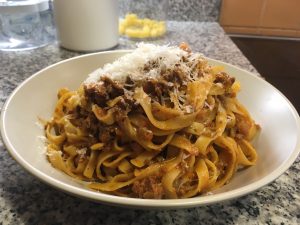 Ragù. Pride of Emilia-Romagna, the rich, wine-and-broth simmered stuff which is indescribably comforting on a cold, foggy day in the Valpadana. And of course, a testament to its inherent goodness is its bastardization worldwide as “meat sauce” or, in an attempt to put an “authentic” spin on it, “bolognese sauce,” or, even worse, “salsa bolognese,” which is simply wrong since a salsa in Italian is something entirely different. But I don’t begrudge the triers — if I did, I won’t be able to write this post, or eat as well as I have, twice lately.

On “Italian nights” the dining facility (DFAC) makes, of course, “meat sauce” — seems like alloro (bay leaf) and erba cipollina (chives) are key ingredients, based off of sight alone (I haven’t tasted it in its “unimproved” form). What I’ve done is ask for a heaping helping of the stuff which I then freeze and re-do in an appropriately Bolognese way. (It’s hard to get fresh ground beef out here.) I’ve been happily surprised both times.

NB: In our household in Italy, we use mamma’s (and hence her mamma’s) time-honored recipe, which is a little different than the classic ragù bolognese, and it’s on that traditional dish that this recipe is based. As I said before, Veneto Sud has the advantage of being sometimes like Emilia-Romagna, sometimes like Veneto. Best of both worlds.

First, thaw the sub-standard ragù the night before.

Make a soffritto of butter (thanks to the Italian PX, I have butter from Udine), EVOO, and finely diced celery, carrots and onions. (Celery and carrots nabbed from the salad bar at the DFAC, onions bought for me on the economy.)

After the vegetables have softened a bit, add the sub-standard ragù. (In a normal recipe one would add the ground beef and/or veal/pork at this point and brown it.) Mix well, careful not to let it burn since it’s already cooked.

Add some white wine and let it evaporate. This is crucial.

Add nutmeg (Indian stuff, sourced from Amazon — coals-to-Newcastle irony not lost on me) and rosemary.

Add a couple cups of beef broth. I had pre-fab gelatinous cubes from the Italian PX which I added to boiled water, although I’m expecting some “Better than Bouillon” beef base soon.

Turn up the heat a bit (depending on one’s timeframe — I had an afternoon meeting so couldn’t let it simmer for hours) and let the broth boil off. Pay attention to sticking and burning potential.

In the meantime, one should be boiling water, salting it liberally, and putting in some tagliatelle which are the only acceptable kind of pasta to eat with this dish. (Unless one is making lasagne, and one could make an exception for real tortellini bolognese, but one should never add southern pasta forms like bucatini and absolutely no spaghetti, please, never, no.) They should be made with egg. They’ll likely be ready in under five minutes.

Once the sauce is relatively dry, mamma taught us to add a lot of grana padano or parmigiano-reggiano and stir it in. (One can, and should, grate some over the complete dish later.)

Toss the pasta well with the ragù (eliminating this step is also not an option.)

Add more cheese and eccola, one has oneself a meal that at least begins to resemble what’s on Sunday plates all over Emilia-Romagna and Veneto Sud. It might even come close to Trattoria Annamaria on via Belle Arti, one of my favorites spots for cucina bolognese.

And thus plain old dining hall “meat sauce” was reborn, made anew and rescued. One may note that I didn’t add any extra tomato — the pre-made stuff already had enough, and one characteristic is that real ragú usually has nothing more than a nominal dash of tomato paste.

There was a chili cookoff today, and I felt slightly guilty for not going as friends of mine were competing, but I took solace in the fact that ragù is like chili in a couple of ways — beyond both being simmered meat dishes, everyone’s mom has a recipe, and everyone’s mom makes the best version of it.

Here’s how my suocera’s version differs from the traditional one:

No pancetta, chicken livers, mortadella or other salty meaty additive with the soffritto.

Grana instead of whole milk at the end.

Thinner passata instead of tomato paste.

Addition of rosemary and nutmeg, which some people have strong opinions about, but I’ve got used to it and quite like it.