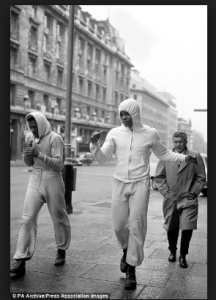 The Champ made it ok to be from Louisville, Kentucky. When traveling, it is much better to be able to talk about the Champ rather than fried chicken chains or whiskey or the other things that people talk about if they think about Kentucky.

The Champ helped my brother out in Serbia. We were at a music festival in Novi Sad in 2004, and although it was a festival designed to promote peace, Americans still had to be careful and respectful. Even though the NATO bombing was five years past — an eternity in cable news cycle damaged American minds — it was like yesterday in Serbia. In case anyone might’ve forgotten, the bridge connecting the island where the festival was to Novi Sad was a temporary pontoon bridge, the original having been struck by NATO bombs. My brother had crossed the bridge and was held up at security by Serbian police officers intent on searching all he had. But when they looked in his bag and found the The Fight by Norman Mailer, with Ali’s picture on the cover, one said in the manner of being let in on some tremendous and wonderful secret, “ah, the Champ,” and then they let him pass.

The Champ helped me out in Italy, too. Wandering the industrial zone around Lodi TBB station which was the only place my magazine could afford an office, where I watched whores trick on the tracks and Gypsies shoot up in the thin tree lines along the track, I found a coffee place tended by a lone and gaunt Italian. The bar, like many things in Italy, seemed from a different era. He had a photo of the Champ on the wall.  I said, “è il mio paesano,” as I waited on my coffee and the gaunt barista came over and started talking to me. We talked for awhile. I went to that coffee place for the rest of the time we had our offices there.

And when some neighborhood bullies acted like they were going to steal my bike one day when I was 11 or 12, my father taught me a few moves in my room and then I overheard him saying to my mother that he was going to send me to his friend Joe Martin’s gym if this went on. My mother groaned. It didn’t go on, so I never went.

Of course all these things could have happened had the Champ not been alive, but here are some that couldn’t have.

In the mid-1990s, my father met the Champ in the lobby of the Starks Building in Louisville, where he had his office. He was working late, as he often did, but it was a Friday and his secretary made him leave before it got too late. As they went towards the catwalk that led to the parking garage, they saw a gaggle of people surrounding the Champ. My dad slid through them and stuck out his hand. “Hello, Champ,” he said. The Champ already had Parkinson’s but smiled and took my father’s hand in his and made a little time for him. When my father caught up with his secretary, who walked faster than he did, she said, “I can’t believe you did that. That was Muhammed Ali.” He said, “I know.”

There was no coffeeshop or restaurant or bar in Louisville that would have served him then and in the next year’s mayoral race, Louisville’s Fourth Street Democratic organization would run segregationist candidate William S. Milburn, president of the Board of Aldermen, against republican William O. Cowger.  Milburn lost overwhelmingly. By 1978, the Board of Aldermen had changed the name of Walnut Street to Muhammad Ali Boulevard.

This entry was posted in kentucky and tagged boxing, louisville, muhammad ali, the greatest. Bookmark the permalink.