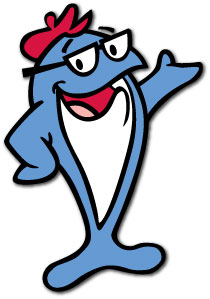 There’s no age quite as awkward as the semi-pubescent 11-14 age range which corresponds to what we now know as the middle school years. My own awkwardness at that age can probably best be encapsulated by a rundown of my lunchtime eating habits: every day, a can of StarKist albacore tuna, some saltines, and a can of V-8. (The excess of sodium was probably what caused terrible cankers, I managed to figure out later.) My schoolmates called me “Charlie Tuna,” and I carried in my first grown-up leather wallet a picture not of family, cat or some braces-ridden, underdeveloped girl I had a crush on but rather a magazine cutout of the hipster fish. I dropped the diet after awhile — good taste, indeed, prevailed — but the habit persisted: in post-college years of impecuniousness, I loved a tuna melt under the broiler at home, or a tuna on rye with lettuce and tomato from one of Baltimore’s many fine delis. And in Italy, my British friends, also used to subpar canned fish, and I were awed at what we called “supertuna” — excellent Italian tuna, canned in olive oil — perfect for adding some protein to a fresh salad or plate of pasta pomodoro.

So it was with a mixture of delight and fear when I came across the following passage in Thomas Pynchon’s Inherent Vice, which I just finished this week, deconstructing the meaning of the cartoon fish and his desire to sacrifice himself. Doc Sportello, the book’s stoned out-private investigator, is hearing an earful from his conspiratorial, and no-less-stoned-out, lawyer, Sauncho Smilax (p. 119 of the Penguin paperback):

“It’s all supposed to be so innocent, upwardly mobile snob, designer shades, beret, desperate to show he’s got good taste, except he’s also dyslexic so he gets ‘good taste’ mixed up with ‘taste good,’ but it’s worse than that! Far, far worse! Charlie really has this, like, obsessive death wish! Yes! he, he wants to be caught, processed, put in a can, not just any can, you dig, it has to be StarKist! suicidal brand loyalty, man, deep parable of consumer capitalism, they won’t be happy with anything less than drift-netting us all, chopping us up and stacking us on the shelves of Supermarket Amerika, and subconsciously the horrible thing is, is we want them to do it. . . .”

“It’s been on my mind. And another thing. Why is there Chicken of the Sea but no Tuna of the Farm?”

“And don’t forget,” Sauncho went on to remind him darkly, “that Charles Manson and the Vietcong are also named Charlie.”

Dark reminders, indeed, and one of the book’s few mentions of the Vietcong, which, has caused some Pynchonites, who’ve very accurately tracked the chronology of the novel to the spring of 1970, to raise an eyebrow or two. The Cambodian Campaign would have been getting underway about a month after the book’s start date of March 24, 1970.

Back to the topic at hand, the idea of the animal who wants to be consumed is a familiar trope in advertising: at least 15 years ago, friends and I chuckled at the image outside Señor Chicken’s in Northern Virginia — a cartoon bird serving up a plate of, guess what, Peruvian-style chicken. Billboards near the old Fischer’s pork-processing plant in my hometown used to feature pigs serving up bacon from “the bacon makin’ people,” and ads of cows serving burgers seem ambiguously ubiquitous somehow — now cleverly riffed on by Chick-Fil-A. And what about the Kool-Aid man, who invites us to drink him with his basso profondo “oh yeah!”?

What Saunch’s rant adds to the adman’s trope is the notion of “suicidal branch loyalty” and intense paranoia. We must like, even desire, late capital’s endless conquest and consumption; everyone is to be chopped up and stacked up for ease of consumption: “not just any can, you dig, it has to be StarKist!” I vividly recall in the mid-nineties hearing about college students from MacLean voluntarily getting A&W and other brand logo tattoos. (At least this company is offering their bod-mod-willing employees a raise for it.) And as always for Pynchon, there’s a nefarious They, and the flesh that They intend to extract from their unlucky creditors will be far more than a pound. Everyone will be caught, thrown aboard, dredged out of safety and fed into an all-consuming mouth — to what ends, we humble prey are not to know.

But far from being the fantasy of a man whose greatest work contains a series of Proverbs for Paranoids, tuna harvesting in 2014 is deeply controversial and linked to all sorts of unsavory effects of late capitalism: floating canneries in Southeast Asia operate under heated controversy and allegations of slave labor, the Mediterranean’s tuna stocks are rapidly depleting, and Mitsubishi is apparently hoarding a vast amount of the world’s dwindling stock — a fact explained to me in hushed tones and over tuna sandwiches by a lawyer in an office in the City of London a few years ago. Not only is StarKist not American-owned anymore, its Korean parent company seems to be up to funny business.

Pynchon’s metaphor — Charlie as spokes-fish for an all-consuming, self-destructive life cycle — looks right, and so the tuna of my early adolescence is to be stuffed into an ever-fattening file labeled “is nothing sacred?”. Perhaps, as he put it, using another excellent culinary metaphor, “paranoia’s the garlic in life’s kitchen, right, you can never have too much.”

As an antidote to the depressing reality of Charlie Tuna as the ultimate symbol of industrialized, exploitative, tastes-bad and in-bad-taste food I give you Anthony Bourdain and his Catalonian guide rhapsodizing over some excellent, locally-canned, and non-exploitative seafood in the home of Cervantes — who, incidentally, knew that there was such a thing as too much garlic.

This entry was posted in america, food, literature. Bookmark the permalink.