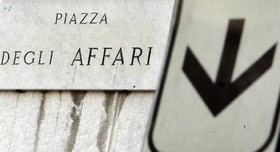 The financial news has been so intense this week that I’ve all but given up on trying to blog it. Twitter‘s where you’ll find most of my comments on the tumult in Europe and the US.

Amid markets falling and politicians on both sides of the Atlantic flailing, one bit of rather shocking news did stand out: Standard and Poor’s Milan offices were raided on the orders of a prosecutor’s office in the small Pugliese town of Trani, ostensibly on the behalf of a consumer right’s group.There is little doubt that the raid was politically motivated.

After all, they picked a hell of a day to execute the warrant. The FTSE MIB, Milan’s main index, dropped 5.16% Thursday, and then a mysterious “technical glitch” prevented both the MIB and the all-share index from being released. The raid on the ratings agencies didn’t exactly take away from the conspiratorial edge. After Reuter’s excellent real-time reporting on the event Thursday, other sources have been quick to pick up on the implications. DC-based consultants Sidar Global Advisor predicts that:

True, but I should note that the ratings agencies are seen with extreme suspicion in Italy, as are currency speculators (despite the fact that most of them work to improve the holdings of pension, not hedge, funds). Thanks in part to a general lack of economic education in Italy, ratings agencies and currency traders are routinely blamed for all of Italy’s economic woes, when in fact it is loss of competitiveness, exports and a decade of almost zero growth that, when combined with Italy’s historically high debt-to-GDP ratio, creates a very unpleasant environment for investors. (Not to mention political incoherence/impotence and terrible bureaucracy.)

Simply put, all these factors far outweigh whatever infelicities the ratings agencies may have committed. The raiding of the Milan offices this week is widely seen as a political move designed to discredit the agencies to outside investors. Sowing distrust and confusion is, sadly, a time-tested way of doing politics and business in Italy. Ratings agencies can make mistakes, they too can be political, and they probably need better oversight — but not all of Italy’s problems can be laid at their doorstep and that of the speculators.