Thoughts on Militarism on Italy’s Day of the Republic

Italy rarely has national holidays that anyone cares about. My building is pleasantly empty at the moment, with most denizens having gone away for a long weekend. Militarism is rarely on display for secular holidays here, although this year has seen a bit more than usual, with the 150th anniversary of unification. Jasmine Tesanovic, born in Belgrade and educated in Italy, wrote that Italy’s alpini crowding into Turin’s public squares last month reminded her of Serbia’s military and paramilitary crowding into Belgrade in the early 1990s:

These volunteer warriors, loud and bold and claiming to fight for a good cause, resembled the Serbian military and paramilitary which conquered the downtown of Belgrade at the beginning of the Balkan wars.

As she notes, the alpini are in Afghanistan along other NATO troops, and whether that war is a “good cause” is definitely worth questioning, especially in these post-bin Laden days. (It should be remembered that Serbia controversially sent troops as well.)  But as anything other than a general condemnation of militaries in general, her comparison rings hollow.  Militaries of any kind have certain things in common, namely, as the saying goes, rough men (and in the American armed forces, increasingly rough women).  And one could argue, although I wouldn’t too forcefully, that violence in Kosovo was done in the loose name of preventing terrorism, in common with the violence being done in Afghanistan today. 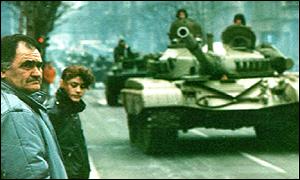 ...before it visits you?

But there the comparisons end: the Yugoslav People’s Army amping itself up for conquest in Croatia and Bosnia in the early ’90s is extremely different from a crowd of “mostly aging, tipsy men,” as she characterizes them, out to do what Italians do best: celebrate in public.  More broadly, Milosevic’s wars, opportunistic land-grabs that played on ethnic divide, bear little resemblance to American-led efforts to bring Afghanistan into a broader orbit of nations – however misguided and bungled those efforts may be.   This kind of equivocation obscures the politics by other means that is at the root of warfare — a dangerous gambit.

On the level of the personal and the violence of war, this week the Washington Post ran a piece based on interviews with three former Navy SEALs who tried to sketch a portrait of the man who shot bin Laden.  The piece is more along the lines of patriotic entertainment than reporting – there should be no doubt that any qualified solider, much less one in the Navy’s crack troops, would be able of hitting a target at close range – but it included an interesting detail:

Smith, who served in the SEALs from 1991 to 1999, got together recently with five Navy SEALs, some of whom he’d served with and others whom he’d trained. “They were responsible for 250 dead terrorists,” Smith says. “They know their number.”

That’s 50 dead men apiece. One wonders if every special forces solider has statistics like this. Every society has had its elites who exercise state-sanctioned violence in the baldest of terms, from the Praetorian Guard and the Janissaries to today’s “operators”, recently put in the spotlight by the Osama bin Laden killing.  Ruminating on their “number” will show that those who practice it are assuredly of a very different bearing than most of us.

There’s a vivid passage in Cormac McCarthy’s No Country for Old Men in which Carson Wells, himself an ex-Special Forces operator, reaches the end of his life. Curiously, among images of his mother and his First Communion that flash before his eyes, are those who died before him. Although it probably bears little resemble to reality, it’s intriguing.