I thought it was the USA…

…or just another country? 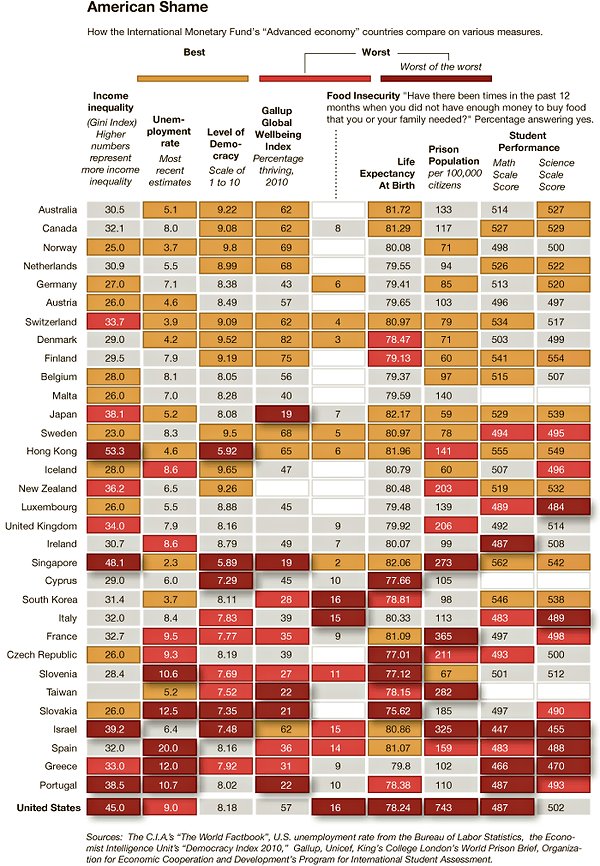 I’m not sure what’s more depressing — the amount of ‘worst’ categories that my adopted country is in, or the amount of ‘worst of the worst’ categories that my native country is in. But something about the data seems off to me — was this chart assembled by the paper of record or actually by the IMF? I don’t doubt that other industrialized nations routinely outperform us; some of these categories are quite well-documented (healthcare availability, life expectancy, income disparities) but all the same, this reeks of a certain school of woe-is-me-American declinism that’s of limited use, if not simply tiresome. But: statistics are interesting, as long as one understand their uses and abuses.

Intuitively, I’m not sure what to make of Italian food security being at the same level of Israel (who, incidentally, did not get the dark red ‘worst of worst’ mark that the belpaese did).  Unscientifically, it’s hard to believe that anyone starves in Italy — but much easier to believe that many families find it hard to ‘make it to the end of the month,’ to translate the Italian phrase.  Rising food prices play a role in that, but according to a recently-unveiled Euripes report (quoted here on MSN),  public debt and the cost of energy and housing are the main culprits.

Mortgages and rents are not affordable for two out of five Italian families, and 40% of households have difficulties in paying rates and fees. A worrying picture emerges when you compare the data of 2011 with the previous year: 40% of Italian families has trouble paying their mortgage, compared to 23.2% in 2010, and 38.1% have trouble paying rent, versus 18.1% in 2010.