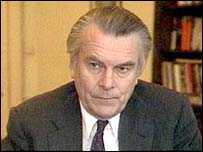 If you can keep your head when...

Doing some research on Milosevic cheerleaders and Srebrenica deniers Living Marxism, I happened upon this debate in the 8 July 1993 issue of the London Review of Books. If you’ve been following the discussion on my post on Mladic you might’ve heard the assertion that the only way to reverse the gains made by the ethnic cleansing that Bosnian Serbs mainly accomplished in two shorts weeks in the spring of 1992 would have been a total military defeat. This is true, but the time for this was, of course, in August 1995 and not the present. But the following quote from author Mark Thompson practically could’ve have come from these pages:

Nothing but nothing will ‘reverse ethnic cleansing’ (David Owen’s initial aim) except a military defeat inflicted upon Serb forces in Bosnia-Herzegovina (and David Owen was employed, of course, exactly to try and forestall the necessity of Western military action by persuading the Serb forces to abandon their maximal aims). Without a Serb defeat there is no chance of stability for the entire region, no hope for Bosnia Herzegovina, and only black prospects for Serbia and Croatia.

Of course not all of this is true. Serbia and Croatia’s prospects are not ‘black’ at present; Croatia’s haven’t been for quite some time.  And David Owen might’ve indeed had the lofty aim of reversing the ethnic cleansing that went on in the first draft of his plan, but he and Cyrus Vance eventually had to own up to the reality on the ground, which was sharply slanted in the Serbs’ favor.  That reality was reflected in their second plan, which was enormously unpopular in that it would’ve only solidified Serb gains.  Of course it was rejected by Bosnian Serb leadership, who at that point must’ve been feeling pretty invulnerable.

It’s hard to reverse territorial gains (and the terror campaigns that inevitably go with them) without an army.  No one learned this lesson more bitterly than the Croats and Bosnians in this conflict.  The only “plan” that would have had any success was the Carrington-Cutileiro one — because it was designed to prevent, not stop, fighting.    But it was too little, too late.

NB: Those who read this letters column to the end will find a young Marko Hoare going the distance over wartime nationalism in the Nazi-occupied territory of Serbia and Croatia.