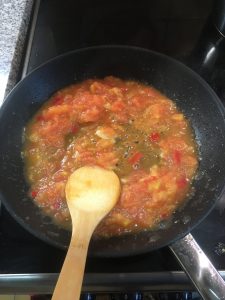 Five tomatoes and a long hot red pepper sitting in my fridge for a week meant that it was time for this dish. This is about as simple as it gets, so the real challenge here was properly skinning and seeding the tomatoes. I basically followed this recipe by Giallo Zafferano’s Sonia Peronaci to the letter. My mom taught me her mom’s method for peeling tomatoes — immerse for a few seconds in boiling water, run under cold water, and then the skin comes off easily. Grandma would apparently then just squeeze them directly into the cooking vessel. (She was of Scottish, not Italian, extraction.) This method is fine but it’s a bit hard on the old hands. Sonia’s method, which calls for making an X-shaped cut on the top of the tomato and then immersing in a bowl of ice, offers a slight improvement. 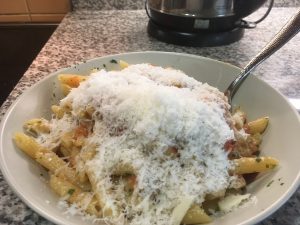 Granoro penne, the end of the DOP pecorino (which, I note, to date has not been restocked), frozen parsley all from the Italian PX.

Tomatoes from a vendor at the bazaar.

Chili pepper from the cafeteria.

Also a bit of organic Zucchi EVOO at the end. 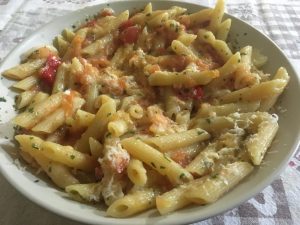 The problem with this dish, like with the shrimp, is that the tomatoes on offer are simply not that juicy. I used five, which seems way too many for one dish of pastasciutta normally. But these things don’t cook down much, and what juice there is remains thin and watery.

Think it would have been superior with some canned cherry tomatoes or passata, which I’ll keep in mind for the next pastasciutta dish — all’amatriciana.