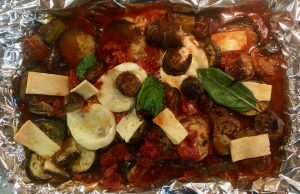 I bought long local eggplants at the bazaar last week, sautéed them in Spanish EVOO with garlic, layered with them cafeteria provided mozzarella slices, threw in some gifted modest tomato sauce (Hunt’s in a can, Prego in a jar), baked for a half hour at 180C, secured cooked Italian sausage from the cafeteria, sliced that and some DOP pecorino, and added it on top, let it bake at 180 for another thirty minutes, let it cool and topped the whole thing with the good Italian organic EVOO and some basil grown in the garden here. Let it cool for a bit and it was fairly delightful. Using substandard tomatoes breaks a cardinal rule, but — war zone rules. The sausage gives it a Pugliese twist; it’s similar to this recipe, which I found after the fact, although I didn’t batter or deep fry the eggplants.

Kept half for today’s penne lunch.

Of course, the name of the dish, ubiquitous in east coast sub shops, certainly has little to do with the city in Emilia — this should be a known quantity to all who care at this point — but I was intrigued to learn that parmiciana may come from its Turkish name patlıcan, itself an Arabic borrowing, which was, of course, what we called them in Macedonia as well. The Italian wiki (“Attribuzione siciliana“) has some good theorizing.

How the storied fruit of Solanum melongena ended up with so many different names is its own story and the interested should be able to turn up some good explanations with minimal Googling. Here’s one of many, although the author is a little too credulous at times — mela insana (apple of madness) for melanzana is pure folk etymology.