48 Hours of Eating in the Fragrant Harbor

All prices in USD, not HKD.

We went to Hong Kong for a variety of reasons but near the top of the list was to eat. What we learned quickly is that food in Hong Kong is really expensive. But it’s good. Not only non-toxic (a serious concern in China that dampens my usual try-everything ethos) but often all-organic.

For a late Saturday lunch, we ventured to Linguini Fini, an Italo-American place in a mall of restaurants. Not a food court, but a high rise wherein each floor was a different restaurant.  The elevator opened directly into the lobby. Decor nice, food generally decent. Excellent burger. A bit small, but with smashed garlic and homemade ketchup and bright nice tomatoes and lettuce. You don’t see that in China — if so, be scared. But it was $23. S– got some ok pasta that was advertised as served with a veal, pig head and tripe ragu’ but it wasn’t that meaty. Pasta overcooked. $26. Bottle of Rogue beer? $12. Espresso? $7 each. Good espresso, though. Bit of a ripoff, but I have to remind S– and myself that this is still Asia and so such food may be exotic and pricey here. Plus Hong Kong seems loaded with British bankers making loads of pounds sterling. Total: $89.

Dinner was better. After braving the hour and a half wait for a funicular car and taking in the stunning views on Victoria Peak, we found Cafe Deco, a spacious place with a stellar view of Hong Kong. Very international menu, the type that usually inspires suspicion (pizza! kebabs! pasta! steak!) menu but they pulled it off. A huge multi-ethnic party of mainly men, led by an enormous mangione, seemed to be determined to test every different type of cuisine, and weren’t beyond giving the staff impromptu lessons as to how food should be prepared or served. We were more modest and split a 14 oz. New Zealand steak, a glass of Mondavi, an excellent salad with grilled parmigiano, asparagus and zucchini. Fresh baked-to-order baguette. For dessert, a fruit platter of fresh, real, non-toxic fruit. A little more than lunch at $92.

After seeing the vaunted (and twenty-year-old — most of my record collection is older than this guy) Tian Tan Buddha, we found ourselves stuck in Ngong Ping, a tasteful tourist village on Lantau Island. Opting to go local finally, we settled on Cantonese lunch at Pak Loh Garden, a large and fairly unremarkable place. Food was plain but decent: two kinds of pork dumplings off the dim sum menu, a huge bowl of veggies, mushrooms and noodles, and some grilled pork with mustard. Tea for two and they had the gall to charge $2 for some pre-meal peanuts. Total: 44 bucks. Thus better to get Cantonese in the real Canton, and no, I don’t believe the old Hong Kong saw that all the good Cantonese chefs fled the mainland for Hong Kong in 1949. 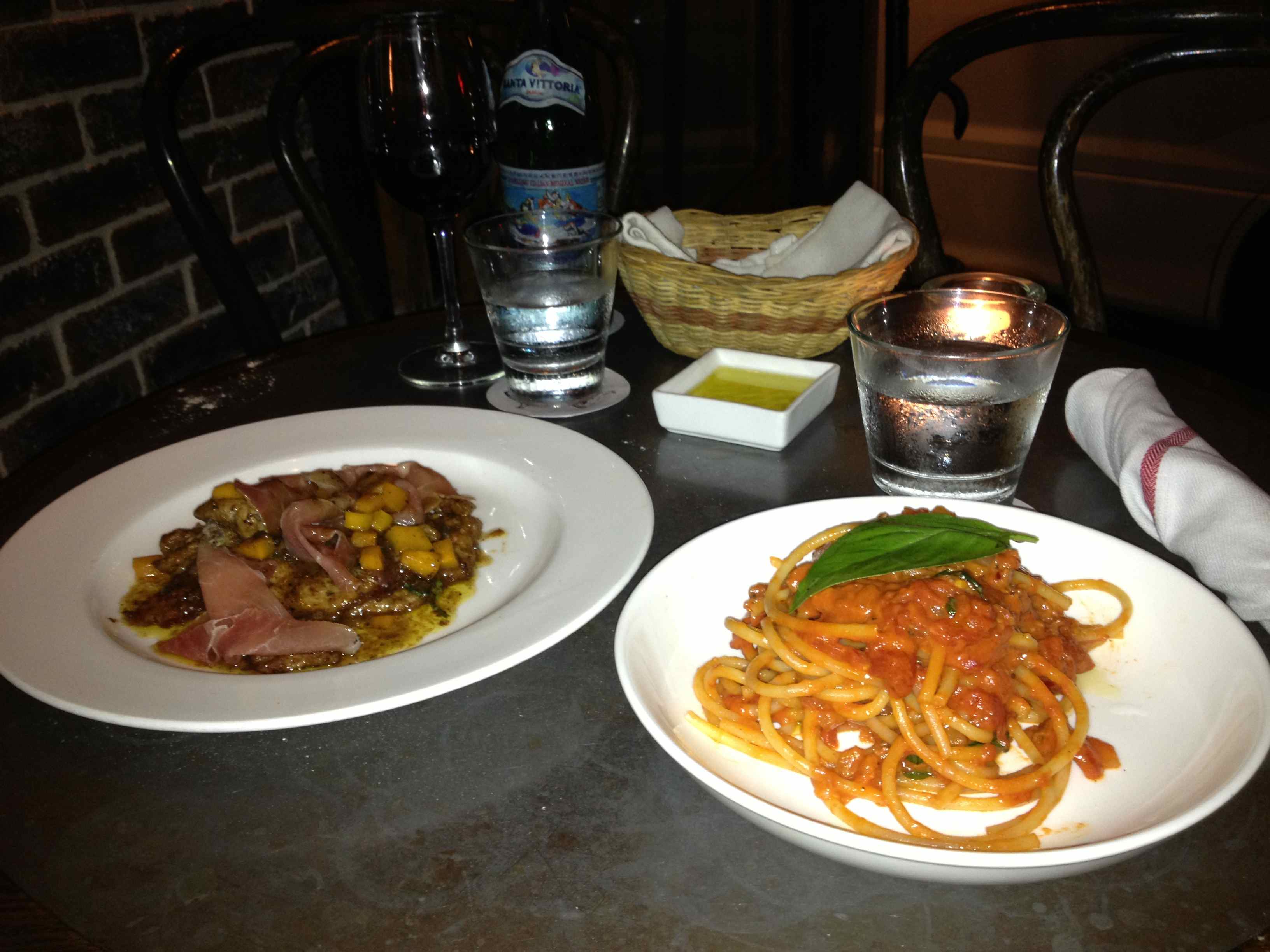 Saltimbocca and bucatini all’amatriciana at Posto Pubblico. Technical problems with WordPress prevent me from uploading more for some reason…

On our last night we managed to go to Hong Kong’s SoHo, a warren of narrow streets winding uphill with loads of hip places to eat, drink and live. We indulged in outdoor dining, which sane people should not do in Guangzhou, at Posto Pubblico, another New York-style Italian place. This one was a vast improvement over our mall experience and S– was happier. A heaping plate of spicy bucatini all’amatriciana with basil and wine-spiked saltimbocca alla romana that favorably compared with my favorite Roman joint in Milano. They brought good bread twice without being asked and I got a good glass of Montepulciano. The waiter was neither unctuous nor over-familiar and as he chased away a beggar dressed as a monk he chuckled to us, “Hong Kong’s biggest scam.” Price: $78. This is why we came here. S– went to freshen up and I sat there in the cool night air listening to the hypnotic house music and thought that with a full bottle I might sit there all night and relive my expat experiences of a decade ago, but that was not to be.

We’ll go back to SoHo to try the Mexican place, the two Argentinian steak places and the three other Italian places. I have faith as they seem geared to those who actually know food, not the desperate, meekly content expats who might think “I don’t care if these nachos are made with orange Doritos that include the toy; this is the only Mexican i’m getting for two years.”

Also worth a visit: the gleaming, ultra-luxe IFC shopping mall along the waterfront. A stop at Singapore-based TWC Tea is an elegant repose after a day of sightseeing, and for about $27, you can pick two teapots from a list of literally hundreds of teas, and enjoy some delicate macarons. For $22 you can take a box of 15 cotton teabags home. Bonus: if you forget that you are in a shiny, steel-and-glass mall, you can pretend you are in 19th-century Europe somewhere.

Our only complaint was the Harbourview, our hotel, which was a bit lacking, especially after our very nice accommodations in Guangzhou. Elevator service was lacking, our view was of a creepy courtyard, and there were few perks — not even free wi-fi. But it was very central, and we didn’t spend much time in it. Here in Guangzhou, we tend to spend more time at home, but that’s mostly thanks to pollution.

The difference between Hong Kong and the mainland is hard to overstate. Most importantly for us, the air is clean-seeming, breathable and it smells like the sea. There was a gentle breeze and generally, it was nice to be outside. During our 48 hours there, it was rainy and cool. No oppressive humidity that orders your brain, trained in the valleys of the Ohio and Po Rivers, to run indoors as quickly as humanly possibly or face certain death by heat stroke, dehydration or exhaustion or all three. No mind-bending pollution. No assault on the senses of every kind of fetid smell you can imagine from organic (rotting pig blood? sewage? stinky tofu?) to chemical (paint thinner? asbestos? vaporizing steel? collapsing village? cocktail of all?). Most everything is orderly in that quintessential English fashion. Everyone, mostly, speaks English. After a few starts, I gave up trying with Mandarin, although I heard a quite a few tourists from the mainland speaking its gong-like, ringing tones. Cantonese sounds less harsh; more tones make it rich and florid. An L.A. transplant of Taiwanese origin I know says it’s the French to Mandarin’s English, although I’m not sure about that.

Hong Kong’s prevailing ethos — the luxury that money buys — has a lot more in common with London or NY or Milan than China, where the ethos is just pure money. Moreover, there’s a general feeling of uprootedness and confusion in China that is hard to capture or describe in a few words. Enormous highways and skyscrapers rise out of nothing. Traffic surges erratically and becomes horrible in second. People walking to work while doing taiji, sometimes even walking backwards. Old ladies cycle against the traffic on huge five-lane highways. People wander along the center lines on these same highways. The empty feeling of massive luxury complexes is highlighted by the huge labor surplus (5-10 people working in one small store, many just standing around). In a gleaming new train station, people sit shoeless on steps amid commuters, eating lunch. A wall breaks away to reveal a construction site, through which workers use forklifts to cart box after box of hundreds of just-hatched chicks, and commuters rush down sparkling new escalators. In short, it can be alien to the newcomer. This feeling was absent in Hong Kong, which I found very familiar despite vast differences in the language and local culture. Chalk one up for the people of the fragrant harbor.