In an effort to provide a little context for Magdi’s provocative posters, some reading from the archives in order to illuminate exactly what happened: 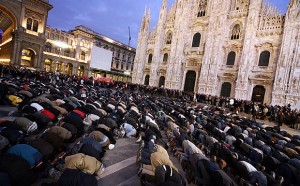 "What can be more excellent than prayer?"

The praying at piazza Duomo was connected to protests against the Gaza War and happened on January 3, 2009.  Organizers of the protests say that the prayer was spontaneous.  Coverage in the Washington Post is here.  There was no violence, and the Archibishop of Milan refused to condemn the prayers. As the Guardian reported, the Muslim community actually met with the archbishop and apologized for the prayers.

In the US, the first amendment to the constitution guarantees right to petition, or freedom of public assembly.  In Europe, it is guaranteed by article 11 of the European Convention on Human Rights, if one believes in the authority of European law.

The riots along via Sarpi on April 12, 2007 started when city authorities in Milan began applying fines to the many wholesalers who operated along the street.

Milan’s administration has taken care of this issue recently by completely refurbishing the street, and making it pedestrian-only.  Without cars and vans, and with bikes replacing pushcarts, the neighborhood is much more livable now — but arguably one effect the improvements had was to make it more difficult for wholesalers there, who simply moved their operations to side streets.

Elisabeth Rosenthal and Elisabetta Povoledo reported on this for the New York Times, as did the BBC.

According to the story, the Chinese rallied around the flag for lack of a better symbol. Since some commentators have pointed out that laws in Italy are often unfairly applied, I wanted to highlight the penultimate paragraph:

Some experts say that the Chinese in Milan have been unfairly singled out by the authorities, and that the authorities have been considerably more lax with native Italians. When laws are enforced in such an inconsistent manner it becomes a case of discrimination, Lanzani said.

Inconsistent enforcement is at the heart of any debate about immigration anywhere, but above all in Italy, where networks of power flout the very laws they are supposed to abide by time and time again.