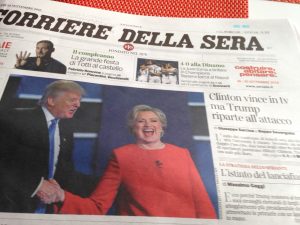 On the front pages

One of the many small pleasures in Italian daily life is picking up a thick edition of one of the dailies and reading through it over a strong morning coffee (or two, if one still has jet lag). Yes, such paper monsters still exist, and the thick, clotted Latinate prose and strong opinions make, as any student of the language knows, for quite different newspaper reading — frustrating at first, but with a payoff after repeated efforts. This is the third presidential election that I’ve had the luck to witness from Italy, and I’m always struck at just how much attention the foreign press pays to our elections. And why wouldn’t they? Our decisions affect many, a fact possibly lost on some of the isolationist movements coursing through democracies today. (NB: I was out with a British friend last night discussing Brexit over some pizza and beer.) So as a testament to that, witness two of the three pages of coverage that the august Corriere della Sera gave to Monday’s debate — not only the photographed two-page spread, but also a third page (not shown), plus they put it as the lead item on the front page. In the ancient times of print media, word count and page space, as well as quaint old notions like ‘above-the-fold’ (which the debate was for Corriere) and below-the-fold were bellwethers for the importance of an event — which, as if it need be said one more time, this election is. 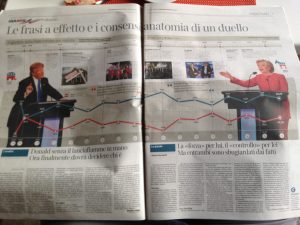 For those not intimidated by the Italian journalism style, this article by Beppe Severgnini analyzing Trump’s use of the word “stamina” and Hillary’s use of “fact-checking” is a nice little linguistic diversion (print edition, bottom of p.9).

And don’t forget to vote.

This entry was posted in italy and tagged Donald, election2016, electionsUSA, Hillary. Bookmark the permalink.